Back in August I purchased a Nike Fuel Band after several months of trying to convince myself that it was worth the $150 Nike was charging for it.  Actually, I didn't purchase it, but received it from my wife as a birthday gift.  I think she was tired of my indecisiveness and decided she would end my misery.  So here I am nearly six months later, and 40 pounds lighter.  I can't say that the Fuel Band is 100% responsible for my weight loss, but I can tell you that it certainly was a major factor.

If you don't know what a Nike Fuel Band is, it is a sharp looking band that you wear around your wrist the same as you would wear one of those yellow Livestrong bands.  The difference is that this one is stylish and does something other than promote your support for a very good cause.  The band contains an accelerometer that is synced up with some fancy algorithms that track your movements during the day.  Not just how many steps, but the types of movements, the speed of your movements, etc., etc.  Your movements are converted to a measure called Nike Fuel points.  If you and I both have Fuel Bands, a point that you earn and a point that I earn, will take us both an equal amount of effort.  With that being said, if you have a Nike Fuel Band, you can compete against anyone else that has a Nike Fuel band via social media.  You can also compete against yourself.  You set a goal for yourself that the Fuel Band keeps track of for you.  It also keeps track of the points you have earned for the day, the steps you have taken, the calories you have burned, and if you don't care about anything else, it displays the time.  The display is LED and is quite sharp.

Here is the rub.  If you choose to purchase one of these nifty gadgets, and you are the least bit competitive, you will find yourself doing jumping jacks in your bedroom 10 minutes before bedtime because you are a mere 250 points shy of your goal.  There is software you can install on your IPad or IPhone that will sync via bluetooth and keep track of your progress throughout the day.  There isn't an Android app yet, but there are promises that one is coming soon.  If you meet your goal, you receive awards in the form of a crazy looking character jumping around on your screen in a congratulatory dance. 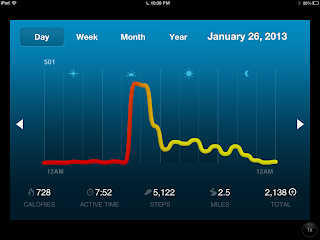 I am obsessed with earning points and the reward is it helping me drop pounds.  My calculations tell me that my weight loss cost me about $3.75 per pound.  Ummmmmmm, I mean it cost my wife.  Visit Nike to get your band today.  Now, where's that jump rope?
Posted by Sam at 10:43 PM

Congrats on the 40 lbs down, that is awesome. No doubt a worthy investment by your wife! Keep it up Sam.